What if everything you ever loved or believed to be true was gone?

Spy thriller Finding Ruby, by Marianne Scott, offers an emotional and heart felt journey of a young woman whose identity has been torn from her and struggles to reinvent herself as she learns to accept past secrets that still threaten the lives of Ruby Draker and her pseudo family.

What people are saying about Finding Ruby.

“Marianne Scott is both a writer and a talented storyteller, a rare combination.”
– Sherrill Wark, author

“There are many twists and turns. Finding Ruby is a page-turner; the plot wraps up nicely.”
– Rose D. Franklin, author

The story behind the story.

It was November of 1989 and I watched my father sitting in front of our television shaking with emotion as he watched images of a crowd of people in Germany tearing down the Berlin Wall – some with their bare hands. “It’s over,” he said with his strong Polish accent, his voice strained and tears running down his face. A young teenager at the time, I remember trying to comprehend why this news event was so emotional for him. I knew he hated communists and he made no apologies for that opinion because he saw firsthand the horrors of an oppressive regime during the Second World War. That scene plays over and over in my mind and I realize that the Cold War is a lesson not easily forgotten. He never spoke of it or his role in the war, but that day, somehow the pain of his past experiences reached out and affected me in a very personal way.

Over the last several months, there have been reports of North Korea launching and testing missiles. It would seem that every time the Western powers condemn their actions or governments, another missile test takes place, actions that question whether the Cold War ever ended. Recently, Iran weighed in on the power play as Iran’s Revolutionary Guard launched several medium range ballistic missiles as part of a military exercise. Many of us lived through that era where school children engaged in practice drills in the event of a nuclear attack. Tearing down the Berlin Wall, the quintessential symbol of the Cold War signalled the end of nuclear threat. But did the threat ever end or just lay in hiding?

The danger and intrigue of the Cold War spurred a plethora of novels about the exploits of spies during a very treacherous time in our history. Today that danger has supposedly passed. We don’t think about it anymore but many of the spies that engaged in covert activity during that era are still alive today. It begs the question, “What did those spies do after the Cold War ended?” Did they go on to have families perhaps under new names and try to lead normal lives? What if the lies and secrets followed them into civilian life? It’s an interesting premise and one that author Marianne Scott explores as she wrote a new spy thriller to add to her collection. In her novel Finding Ruby, the Cold War theme prevails but the story takes places in the present. Her protagonist is a young woman caught up in exactly that kind of plight where she not only has to save her own life but the lives of other ex-spies and their families as someone with a vendetta from the past tries to kill them. 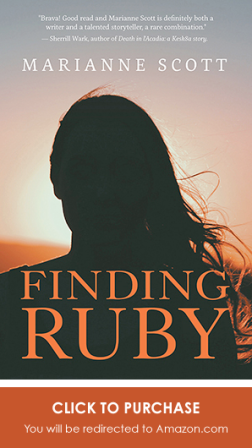